FREEDOM NOW: HOW INSTITUTIONS OF POWER FUEL AND STALL CHANGE 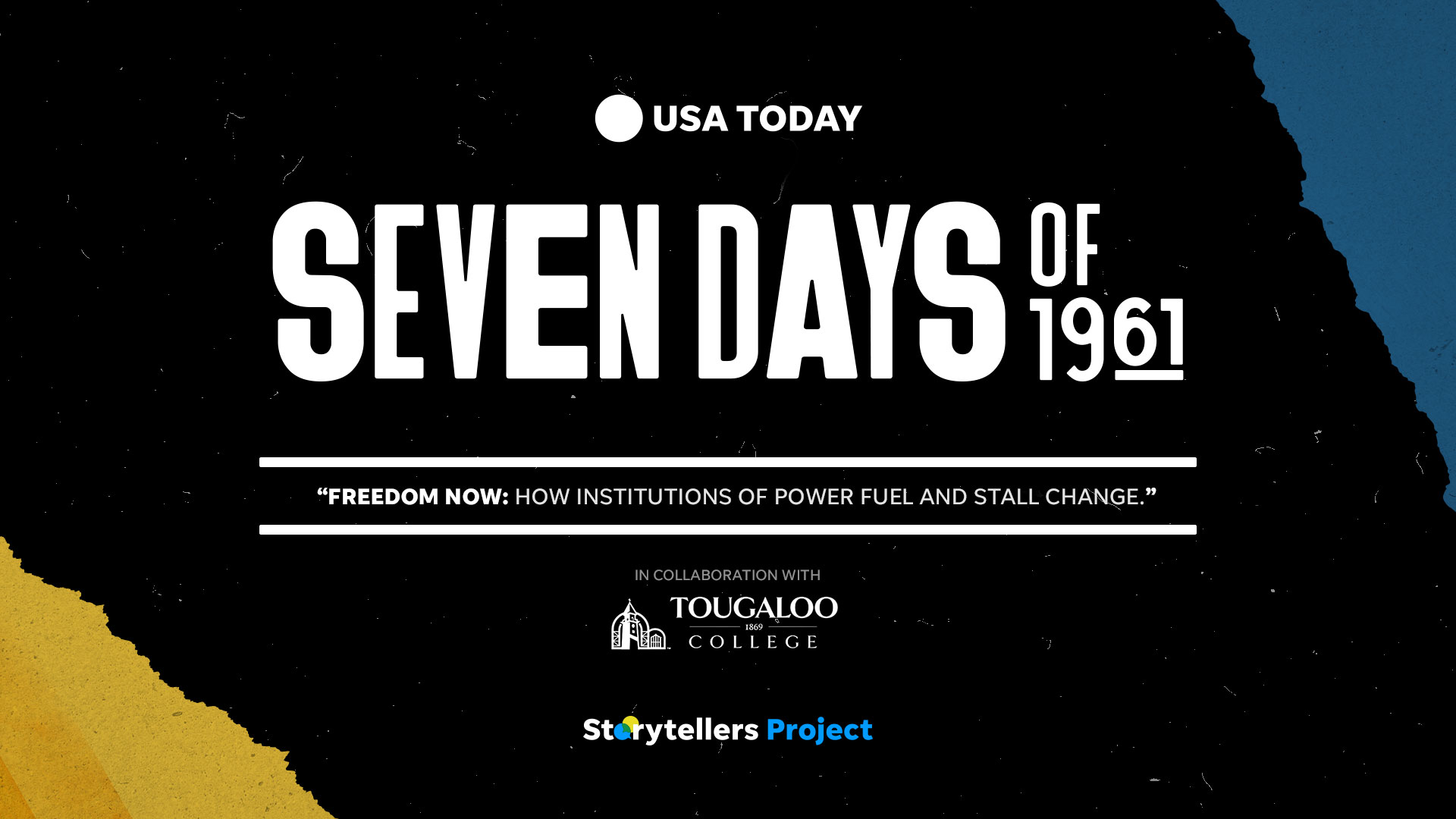 
This event is part of USA TODAY’s Seven Days of 1961 project, which spotlights seven pivotal protests in 1961 that fueled the civil rights movement and helped end legal segregation and extend voting rights to millions of Black Americans.

This project arrives more than a year after the deaths of George Floyd, Breonna Taylor, Ahmaud Arbery and many other Black Americans. It comes amid a divisive national debate over systemic racism, equal access to the voting booth, how we teach American history and what role institutions such as the police, media and government serve in making our society safe and fair for all.

Audience members will have the opportunity to pose questions to the panel. 
This is the first of three virtual events USA TODAY will host as part of its Seven Days of 1961 project. 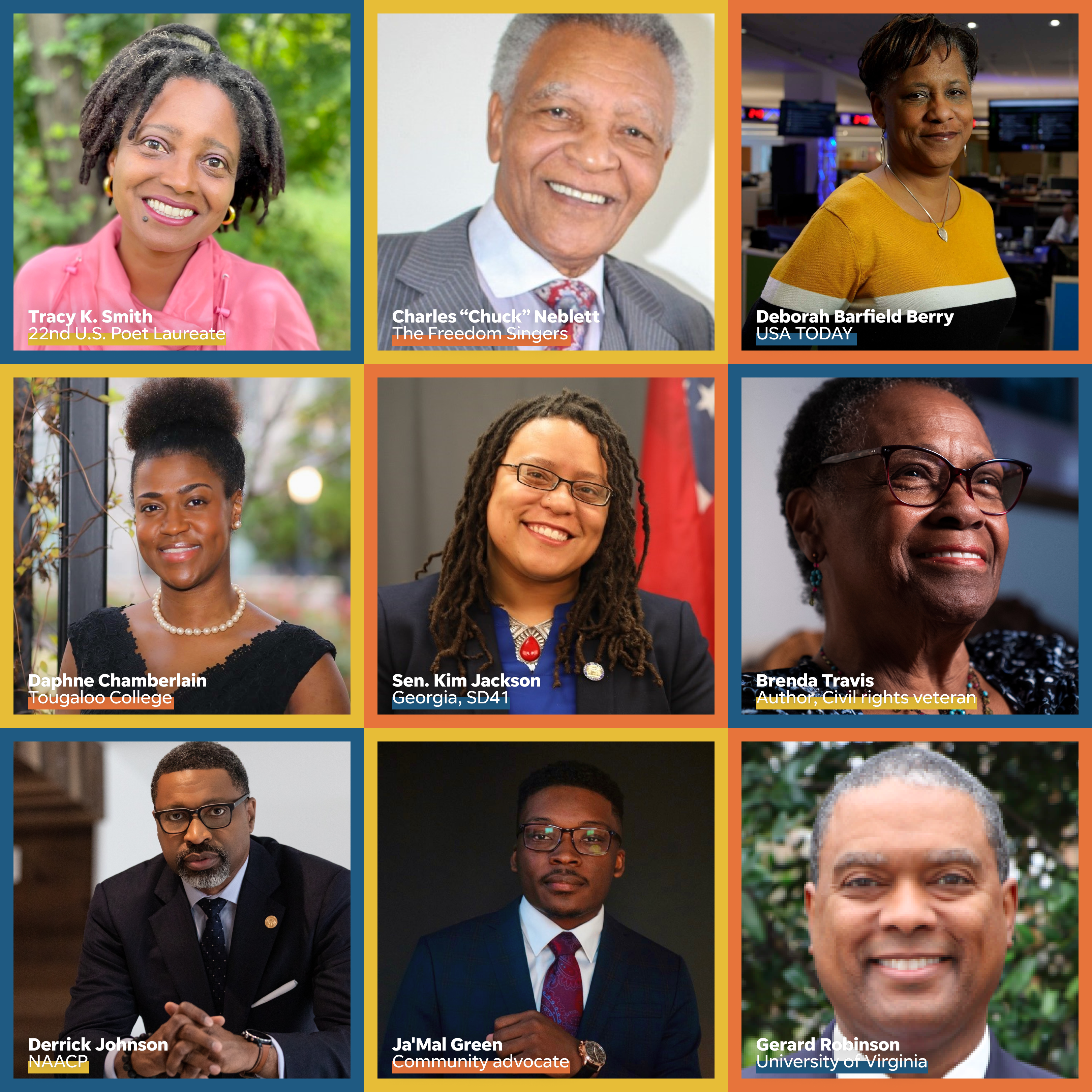 Event poet
Tracy K. Smith is a Pulitzer Prize-winning poet, memoirist, editor, translator and librettist. She served as the 22nd Poet Laureate of the United States from 2017 through 2019. She is a professor of English and of African and African American Studies at Harvard University in Massachusetts. Smith is the author of the poetry collections “Wade in the Water,” which was awarded the 2018 Anisfield-Wolf Book Award; “Life on Mars,” which won the 2012 Pulitzer Prize; “Duende,” winner of the 2006 James Laughlin Award of the Academy of American Poets; and “The Body’s Question,” which received the 2003 Cave Canem Prize. Her memoir, “Ordinary Light,” was a finalist for the 2015 National Book Award in nonfiction.


Musical performer
Charles “Chuck” Neblett is a civil rights activist and founding member of The Freedom Singers, which helped raise awareness for the Student Nonviolent Coordinating Committee, one of the leading civil rights organizations of the 1960s. As a field secretary for SNCC, he protested against segregation in higher education, organized workers and helped register Black Americans to vote. As a performer, he traveled across the nation bringing freedom songs to audiences to help raise money for SNCC and tell the story of the civil rights movement. Neblett and The Freedom Singers performed at the White House for President Barack Obama in 2011 for “A Celebration of Music from the Civil Rights Movement.”


Moderators
Deborah Barfield Berry is a national correspondent for USA TODAY where she focuses on voting rights, civil rights and racial disparities. Berry, an award-winning journalist, has spent most of her 35 years in journalism in Washington, D.C., where she has covered Congress and national politics. She was part of a Newsday team that won a 1997 Pulitzer for coverage of TWA Flight 800. More recently, she won the 2019 National Association of Black Journalists Salute to Excellence Award for national news for “Black Women Candidates for Congress Say They're Reclaiming their Time’’ and several for the USA TODAY project 1619: Searching for Answers.

Daphne Chamberlain is an associate professor of history at historic Tougaloo College in Tougaloo, Mississippi. She has been instrumental in establishing Tougaloo's Institute for Social Justice and was the founding director of the Council of Federated Organizations (COFO) Civil Rights Education Center at Jackson State University. Chamberlain has served as a scholar-consultant to several civil rights history projects and has taken part in the planning of the 50th anniversary events commemorating the Freedom Rides, the Tougaloo Nine, the assassination of Mississippi civil rights leader Medgar Wiley Evers and the Mississippi Summer Project, also known as Freedom Summer. Her research focuses on children's participation in the Mississippi black freedom struggle.


Panelists
Kim Jackson serves as Senator for Georgia State Senate District 41. Kim works every day to bring the diverse voices of her district to the Capitol: immigrants, refugees, and people living on the margins. An Episcopal priest from the rural South, Kim made Georgia home over a decade ago. After graduating from Furman University, Kim volunteered as an EMT and led her colleagues at Emory's Candler School of Theology in advocating for Criminal Justice Reform in Georgia. She currently lives on an urban farm and co-creates church with people experiencing homelessness in downtown Atlanta.

Brenda Travis is a civil rights veteran who attempted to integrate a bus station in her hometown of McComb, Mississippi, in 1961. Travis, then a 16-year-old youth leader with the NAACP, also led a high school walkout that would help spur youth activism across the state. She is the co-author of her memoir, “Mississippi’s Exiled Daughter: How My Civil Rights Baptism Under Fire Shaped My Life.” She is also the founder of the Brenda Travis Historical Education Foundation, which works to preserve civil rights history and encourage young people to fight for social justice.

Ja’Mal Green is a community advocate, entrepreneur, motivational speaker, radio host, political strategist and former Chicago mayoral candidate. He has worked with the Black Lives Matter social justice movement and other organizations to highlight police violence and economic disparities, including in the housing market. He served as a surrogate for Bernie Sanders in the 2016 presidential election.

Gerard Robinson is vice president for education at the Advanced Studies in Culture Foundation, and a fellow of practice at the Institute for Advanced Studies in Culture at the University of Virginia. Robinson advances ideas about K-20 education, public policy, social mobility and race in American institutions through edited books, including “Education for Liberation: The Politics of Promise and Reform Inside and Beyond America’s Prisons.” He earned an Ed.M. from Harvard University, a B.A. from Howard University, and an A.A. from El Camino Community College. He served as Commissioner of Education for the State of Florida and Secretary of Education for the Commonwealth of Virginia.

Registration for first "Seven Days of 1961" event is currently closed. Please come back next year!