POWER TO THE PEOPLE: HOW VOTING LAWS HAVE SHAPED THE UNITED STATES AND BLACK AMERICA. 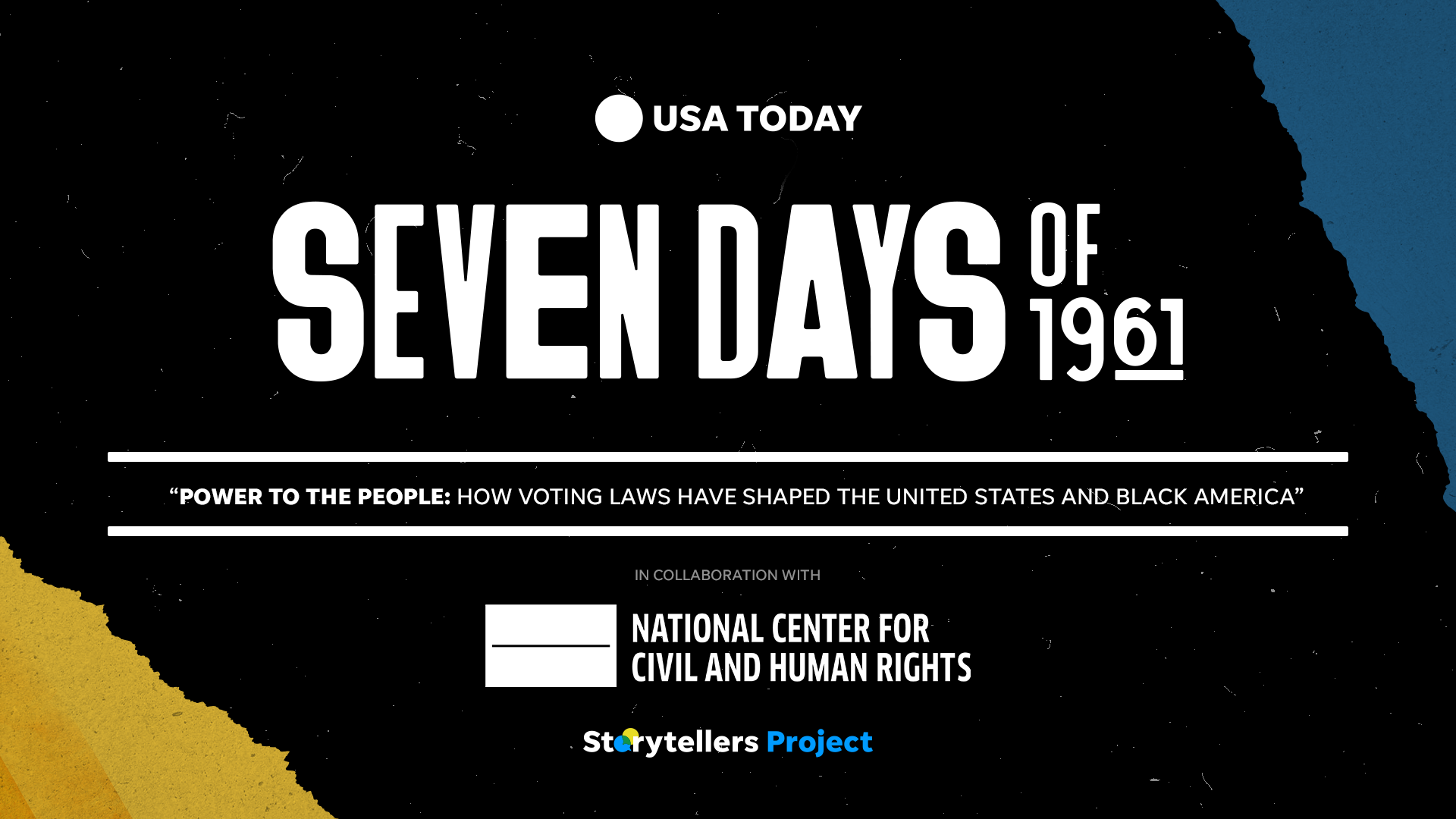 USA TODAY is inviting readers to examine how racism continues to shape our country in this free virtual event titled, “Power To The People: How Voting Laws Have Shaped The United States And Black America." In collaboration with the National Center for Civil and Human Rights in Atlanta, this conversation focuses on how equal access to voting is essential to the promise of democracy.

“Power to the People” is inspired by mass meetings held in Black communities to end segregation. These gatherings served to keep hope alive through song, prayer and testimony.

This is the second of three virtual events USA TODAY will host as part of its "Seven Days of 1961" project. You can watch the first event on-demand here. 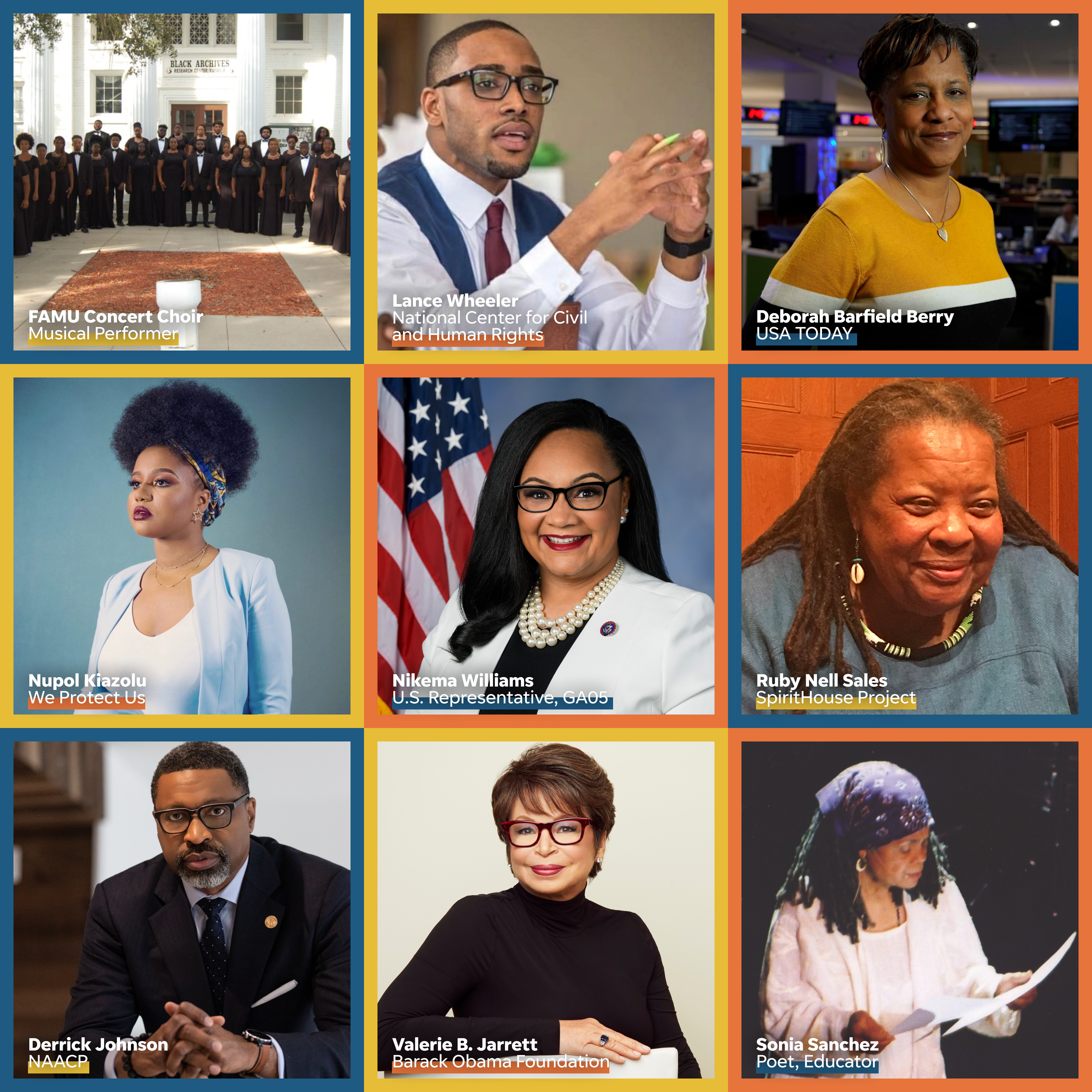 Event poet
Sonia Sanchez is the author of over 20 books, including “Homecoming,” “We a BaddDDD People,” “Love Poems” and “Collected Poems.” In addition to being a contributing editor to Black Scholar and The Journal of African Studies, she has edited an anthology, “We Be Word Sorcerers: 25 Stories by Black Americans.” BMA: The Sonia Sanchez Literary Review is the first African American Journal that discusses the work of Sonia Sanchez and the Black Arts Movement. She is the recipient of many awards, including a National Endowment for the Arts, a Community Service Award from the National Black Caucus of State Legislators, the American Book Award, the Langston Hughes Poetry Award, the Harper Lee Award and in 2011 she was named Philadelphia’s first Poet Laureate. She has lectured at over 500 universities and colleges in the United States. Her poetry also appeared in the movie “Love Jones.”

Musical performance
The Florida A&M University (FAMU) Concert Choir has performed at Carnegie Hall in New York and in various major cast roles in musicals and opera productions. The choir has teamed up in the past with hip hop artist "T-Pain" and the group "Sweet Honey in the Rock.”

Lance Wheeler currently serves as the director of exhibitions at the National Center for Civil and Human Rights located in Atlanta. He previously served as the education and public relations manager for the Margaret Walker Center & COFO Civil Rights Education Center at Jackson State University and served as the inaugural curator of exhibitions at the Mississippi Civil Rights Museum. As a public historian and community curator, he has worked with civil rights families and organizations like the Medgar & Myrlie Evers Institute to connect communities and engage youth. He serves on the council for the Southeastern Museum Conference and is the Committee Chair for Emerging Museum Professionals for the Association of African American Museums.

Panelists
Nupol Kiazolu is an internationally recognized civil rights activist and organizer from New York City’s Brooklyn borough. She began organizing at 12 years old and has dedicated her life to the movement ever since. She is also Miss Liberia USA and a full-time student at Hampton University in Virginia. She's currently pursuing her degree in political science and plans to attend law school in 2022. She is the founder of We Protect Us, a community service organization in New York City dedicated to empowering Black and brown people in disenfranchised communities through mutual-aid, education, self-defense, and community safety.

Ruby Nell Sales has dedicated her life to fighting for justice and Black lives. She is an educator, Black folk theologian, social critic and long-distance runner for justice. She is the director of the SpiritHouse Project, a national non-profit organization that uses the arts, research, education, action and spirituality to work for racial, economic and social justice. She became active in the ongoing fight for civil rights as a student in the 1960s, working with the Student Nonviolent Coordinating Committee to help the Freedom Summer voter registration drive. Her work appears in magazines, anthologies and in documentaries.

Valerie B. Jarrett is the president of the Barack Obama Foundation, board chairman of the nonprofit Civic Nation and a senior distinguished fellow at The University of Chicago Law School. She is the author of the New York Times bestselling book “Finding My Voice: My Journey to the West Wing and the Path Forward” published in April 2019. She was the senior advisor to President Barack Obama from 2009-2017, making her the longest-serving senior advisor to a president in U.S. history, and oversaw the Offices of Public Engagement and Intergovernmental Affairs and chaired the White House Council on Women and Girls. She serves as co-chair of The United State of Women, senior advisor to Attn and on the boards of Walgreens Boot Alliance, Inc., Lyft, Inc., 2U, Inc., Ariel Investments, The John F. Kennedy Center for Performing Arts, The Innocence Project, Sesame Street Workshop and the Economic Club of Chicago. Jarrett received her B.A. from Stanford University in 1978 and her J.D. from the University of Michigan Law School in 1981.

Congresswoman Nikema Williams has been a fierce advocate for social justice, women and families throughout her political and professional career. She is proud to represent Georgia's Fifth Congressional District in the United States Congress. As a member of Congress, Williams continues to uplift the legacy of her mentor and predecessor, Congressman John Lewis, by fighting to prevent voter suppression and expand free and fair access to the ballot box.

Registration for second "Seven Days of 1961" event is currently closed.